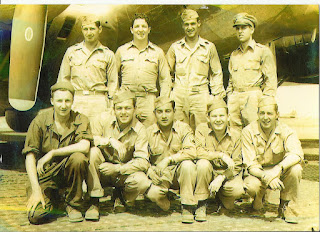 His war, like may others, was a long, harrowing experience, filled with nightmare stories such as the time his navigator lost his head from a direct hit to the nose of their airplane by flak from a German 88 anti-aircraft gun.
Sacrifice.  That is what they all shared in those days.
So today, if you’ve got a spare moment, perhaps you can reflect on what those brave men, women, and children sacrificed so that the better parts of our humanity were not outcome by the worst.
Posted by S. L. Duncan at 11:01 AM 3 comments:

A day or so before the start of November, I happened to trip across a post about the upcoming NaNoWriMo or, for those who don’t know what it is, National Novel Writing Month.  Writers participate, writing every day in hopes of reaching fifty thousand words in thirty days.  Now, that ain’t a novel (a middle grade children’s book, maybe) but it is a damn good start on one.
Typically, this sort of thing I don’t get into.  Good or bad, I’m sort of set in my ways as a writer.  I try to write every day, but I don’t always.  And sometimes, I’ll sit and crank out 10k at a time in creative bursts.
NaNo was one of those things as a writer that the NASCAR race at was for me living in : something I always heard about after the fact but didn’t have any desire to participate in.  (I neither care for NASCAR, nor being told how and when to write.)
This year, though, I caught sight of the competition, (or whatever it is) early on a blog.  I figured, what the hell.  With THE REVELATION SAGA awaiting its fate and a YA Civil War revenge story simmering, I decided participation might be a good opportunity to jump into something new.
So, off I went.
I had a nice start, wrapping up about 10k in half as many days a that amount should take.  I spent some time on research, some time on outlining.  And then I realized I was telling the story from the wrong perspective.
One of the rules to NaNo is never erase a word.  Here is where I start to diverge from this whole thing.  These rules.   There is something to be said about keeping continuity, quality, and art in mind while you write.  Sometimes those horrible bits need to be removed, lest they spread like cancer to the good parts.  Bad writing is infectious.
I’m not saying you should edit every bit, but I find that writing a novel requires a reread of some passages, especially if tones and themes are being bookended or mirrored elsewhere.  The better written those passages are, the better the new stuff tends to be.
Keep in mind that I like my first draft to be as strong as possible.  That doesn’t mean it’s not shit.  It likely is, but at a minimum the story should be structurally sound .  Not perfect, but sound.  It should survive plot and character scrutiny.  A first draft is like the bones of an athlete.  The muscle tone, training, and talent are built and cultivated in the later drafts.
Of course, there is no judging panel ready to crack your knuckles with a ruler.  So, pissing on the rules, I decided to continue in the spirit of NaNoWriMo.
My final word count is 36,387.  Not too bad, considering I was only able to write for a little over half of the 30 days.   With a pregnant wife, both families in town for Thanksgiving, Black Friday, and football season winding down, that’s all I was willing to spare.
The important thing is, what I’ve written has me excited. There is momentum.  And it’s likely something that I would still be procrastinating about if NaNo hadn’t prodded me into the draft. Mind you, it’s still a mess, but a workable one.
Posted by S. L. Duncan at 9:48 AM No comments: